A radio sweeper is a short, pre-recorded sample used by radio stations as segues between songs that give listeners a brief station identifier or promo, generally 20 seconds or less: “You’re listening to the soft sounds of [NAME] radio. Easy listening throughout the Bay Area,” for example.

Sweepers are also known as liners, bumpers, radio imaging, sweeps, station imaging, stingers, IDs, idents, promos, shotguns and intros. Most sweepers will have a voice over included on the audio.

There are no reviews yet. 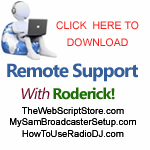